Our farm is green again, but of course the vines are dormant and we are putting out fertiliser and mulch to give the vines a big push after the drought year of 2020. Many vignerons did not make wine this year due to drought and bushfire smoke.

Here are some recent activity pictures :-

The weather pattern has changed at last and the grapes enjoyed a few good falls of rain. Something to do with the Indian Ocean Dipole. The birds came in February in a big way. There was obviously no other food because even with the nets on they ate most of the crop even inside the nets which went on on 25th February. The Baume reached 11.6 on 1st March so we scheduled harvest for 15th March. We abandoned the Chardonnay and just collected 300Kg of Pinot Noir. Thanks to Ed and Glenda, Tudor, Felix and Corinna and Phylli, also Doug and Laurence.

We’ll dedicate this crush to St Nino of the Caucasus who made her cross with vine prunings bound with her own hair.

The cows are looking happier and we sent off Twenty cows and calves to Victoria where they have plenty of pasture.

No rain this month and wingless grasshoppers eating everything under 1m high. Nature is out of balance. We are irrigating every 10days for a few hours but the vines are struggling. Luckily we had a reasonable harvest in March this year so we decided to bottle the 2019 vintage before Christmas. Thank you to friends and family who helped with the bottling and cleaning up. Our cows are looking for supplementary feed the whole time.

We are caught in the terrible drought across nsw. The vines are struggling and we are putting on a little bore water to back up the all too brief showers this spring. We attach photos of activities keeping us occupied. Marking the new season calves, racking the wine out of barrels to tanks prior to bottling in December. Diana’s designs for the new wine labels, and the successful seminar on organic soil health put on by Bathurst Region Vignerons together with      Greening Bathurst. 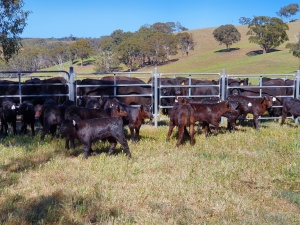 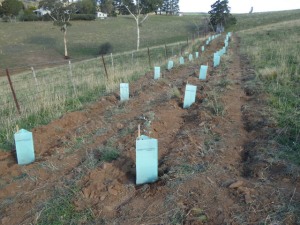 We have had great success in Bathurst with the winter winery wander June 2019 where we sold our wines at Boxgrove together with Well Fed Catering. The Bathurst winter festival was as usual a good local event put on by Bathurst Regional Council featuring local wineries, breweries and distillers. Our orders for our 2018 Pinot Noir are racing along. We have started pruning our 27 rows of vines with our usual love and care and will be mulching the prunings to place along the rows.

Our vineyard received 120mm of welcome rain in January and the vines are now looking very prosperous. Verraison is on the go and the birds haven’t found us yet. It looks as though harvest will be from about 20th March to the first week in April.

I am very pleased with the 2018 wines in the bottle which drink well now but hold promise of great depth in a year or two.

We had reasonable rain in November and December 2018 so the vines which were late to flower suddenly jumped along and now have maybe an excess of growth and fruit. This may require a summer prune and a watch for outbreaks of mildew in the heat of January. We lifted the foliage wires in December 2018 and mowed between the rows. The vineyard looks a picture.

Various Friends of Bellbrook Wines have helped with bottling. Each bottle is filled by a vacuum pump and hand capped and labelled. I looks like 2018 vintage will exceed 2500 bottles

On 10th November 2018 Bellbrook Friends Wines was a major sponsor of a restoration and sustainable farming conference held by Greening Bathurst at the Flannery Centre in Bathurst. There were over 200 attendees and the keynote speaker was Dr Charles Massy.

Its august 2018 and the drought continues. Our vines are dormant now and pruning has nearly finished. This year we are shredding and mulching all the prunings to put along the vine rows.

We had a terrific Bathurst region Winter Winery Wander organised by Panorama Travel to take place in June at BoxGrove Function Centre near Bathurst. We had four bus loads of 45 people arriving at 1.5 hour intervals to taste food by Al Dente of Bathurst and drink Bellbrook Friends Pino Noir, Chardonnay and Rose.

In July we were represented at the Bathurst Winter Festival in the centre of town and served our Gluhwein (mulled wine) with great success to hundreds of customers rugged up against the cold. 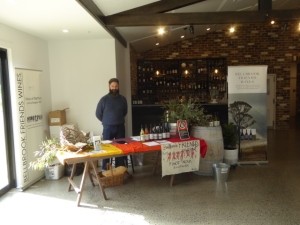 Some bird protection measures during 2018 vintage 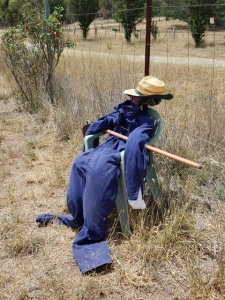 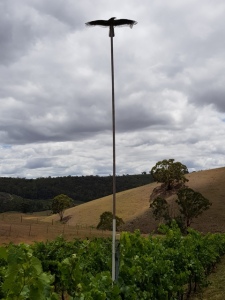 WE are in a green drought as of 1st Sept and our native kangaroos are enjoying Bellbrook grass while we are feeding our cows !

We have finished pruning 27 rows by cane pruning and we have ordered our biodynamic preparations for the spray date on 13th September, when the moon and saturn are in opposition. Keeping our fingers crossed against late frosts, and have Valerian tincture ready to spray out after budburst in case of frost predictions.

JULY 2017, We had a great BATHURST WINTER FESTIVAL, with visitors from outside the area enjoying local cool climate wines and hot mulled wine with the band playing and ice skating.

We are giving the grapes a good hard prune now after some frost damage last November which caused us to cancel our vintage in 2107. Luckily we have plenty of wine in stock from previous years for our loyal customers

DECEMBER 2016. WE have had rather too much rain and cold weather for the grapes but the pasture is splendid, see pics below. We had a marathon bottling session in the first week of December with our wonderful Bellbrook Friends. We are delighted with the new 2016 Chardonnay, the Pinot Noir Rose, and our best Pinot Noir  since the bronze medal years of 2012 and 2013.

We’ve had a long wet winter with the ground weeping with joy at the replenishment of our aquifers deep and shallow. Unfortunately we had light frosts as late as 23rd october which has damaged the Chardonnay a little. So it has been a late budburst and we could say our vineyard is nearly a month behind this year. But the cattle are loving the good spring and the calves are as fat as ever they have been.

In september 2016 George published his first

friends at the NSW writers centre

March 2016. The Harvest of The Decade

Beautiful sweet fruit, baume 12 degrees on 6th March rising to 13 degrees by 20th March. We picked over three weekends in temperatures ranging from 30C to 18C. Some ice blocks were 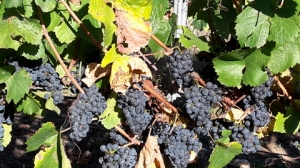 used early on to keep the ferment under control. We have about 700 litres Chardonnay, about 500 litres Pinot Rose, and 1200 litres Pinot Noir in various stsages of ferment and settling. There was so much sweetness around the winery that the bees were our constant companions. 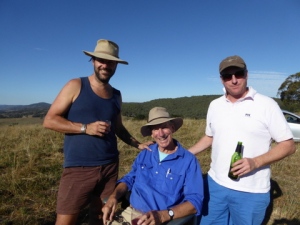 Included Diana Hosking, Kith and Heloise and Remy, and Felix from Bellagio and Nelson rd tuckshop in Sydney.

A wonderful sweet vintage so far with the best of friends and celebration lunches and dinners up here at 1000m, in the arms of nature.

Feb 2016, veraisson has started after 100mm rain in 10 days. We need a month of dry warm weather for the vintage of the decade. Nets are on although the birds aren’t here yet. The 2015 Pinot was bottled over two days and will rest in the bottle for a year now.

The 2016 vintage is shaping up to be the best for a decade following a frost free October and we expect to be harvesting over a three week period in March 2016. In the meantime we are bottling the 2015 Pinot Noir which has a rich full bodied taste. We bring our pallets of bottles from the transport company in Oberon. Friends of Bellbrook will be helping both  the bottling and putting the nets on in February and the harvest in March.

Celebrations due in Bathurst on May 9th 2015 to celebrate Governor Macquarie’s visit 200years ago in 1815.

Bathurst region winemakers at the Royal Bathurst Show in April 2015

Some of the crew for bottling and harvesting in March 2015.

It’s Spring 2014. We had snow on 14th October then frost 0n 15th which did some damage as we had budburst already. I am trying Valerian organic spray to help recovery.

The best news is from the National Cool Climate Wine Show in Bathurst where Bellbrook Friends Wines were given Gold for the 2013 Chardonnay and Bronze for the 2013 Pinot Noir. The Chardonnay earned the trophy for the best Bathurst region wine of the show.

OK friends, its August and pruning is nearly finished. The old Ferguson has already proven its worth pulling a Toyota Prado up a slippery slope. Those reliable cows are 75% through calving and the bulls are already getting restless again. We lost a magnificent red stringybark in a snow storm and it will provide firewood for 2 years at least.

Bellbrook is settling down after harvest and crushing the grapes and sending the weaner calves off to market. 99% of the cows were pregnant so they will be happy to let their calves go and let the new babies progress. Thanks to all Bellbrook friends and my best friend Diana.

Since the optimistic spring 2013,we had more late frosts and drought. Very tough conditions at the beginning of 2014 and the vines are several weeks behind their normal development and with a reduced yield which may not be a bad thing. We have continued the biodynamic regime with several sprays of horn manure and one of horn silica. We are trying some of the esoteric recommendations of Hamish McKay and John Priestly from their biodynamics course at Mulloon Creek farm.
Good news from the Australian Cool Climate Wine Show 2013.
2013 Chardonnay awarded average 15 out of 20
2012 Pinot Noir awarded average 15.5 (Bronze Medal)
2010 Pinot Noir awarded average 14 out of 20